Progress of Creative and Innovative Management

Foundation as a Draper 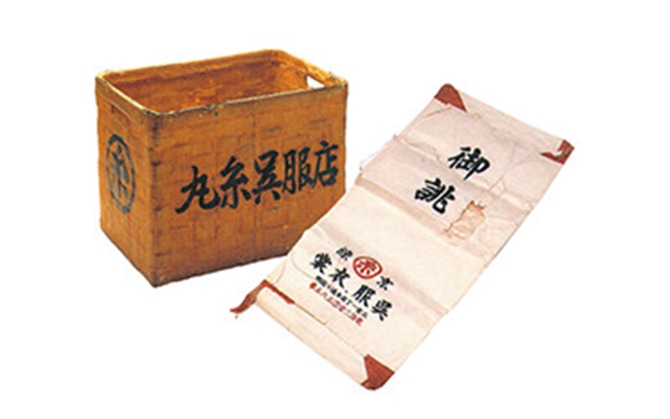 ACOM was founded as "Maruito Gofuku Ten" in the Sannomiya shopping district, Ikuta-ku (present, Chuo-ku), Kobe, on 2 April 1936. When the founder, Masao Kinoshita, started this business, he promised himself to hold the spirit of mutual trust, "To trust others, and win trust" as a philosophy. The trade name, "Maruito", was decided since the harmonization of warp and weft, which is linked to an element of the kimono, represents mutual trust.

"When one trusts another from bottom of one’s heart, the trust is reciprocated without fail."

The founder who expressed his hope to expand the circle in the "Circle of Trust", achieved the business he had hoped.

One day, there was, in front of the shop, a girl at a loss as to which pattern on the rolls of cloth to choose. At that time, as rolls of cloth were extremely expensive, she seemed to hesitate in deciding by herself. The founder understood this, and gave her a roll of cloth, saying "how about bringing this back home, and asking your mother?" After a while, she returned to the shop with her mother. Her mother said, with surprise "You entrusted this unknown girl with such an expensive item..," and purchased the roll of cloth which the girl liked.

The bond of trust created at that time led to long customer dealing. Maruito Gofuku Ten's business mind, "to trust others" raised the empathy of many customers, and this resulted in a good reputation and great prosperity. Furthermore, he said that he had never been betrayed by customers, by trusting them.

From Draper to Pawnbroking 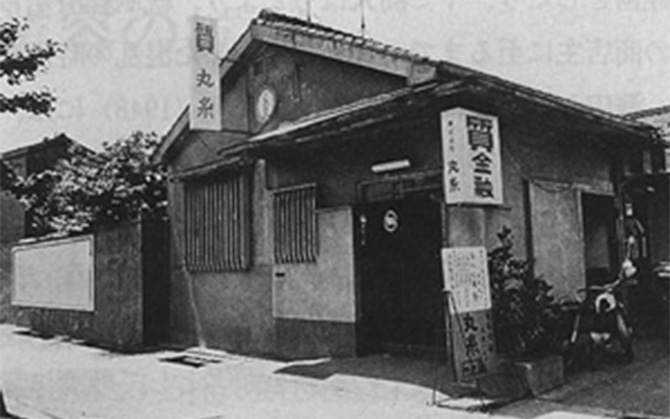 In December 1942, "Maruito Gofuku Ten", which had been smoothly developing, closed down voluntarily, due to the worsening phase of the war.

After that, the founder reestablished himself as a pawnbroker, in July 1948. He established the Nada, Motomachi and Ougi branches in Kobe, and the Umeda branch in Osaka - expanding the business while operating a finance business, doing activities such as bill discounting, and merchant loans. 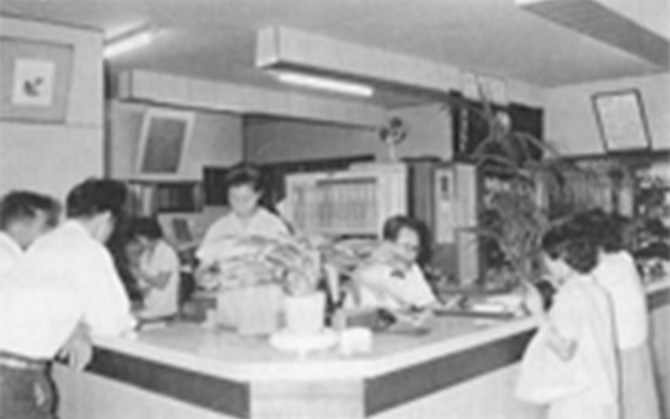 In the 60's, Japan embarked on an era of mass production/ mass consumption, and the value of the bearer of "real credit", called 'Pawnbroking', was declined. At that time, a marketing revolution took place caused by the emergence of "Shufunomise Daiei (shop for housewives)". The founder strongly considered the modernization of people's finances was an urgent need, and decided to attempt a Salary-Man Loan, a type of consumer finance business which provided loans with personal credit. This did not exist in the common sense, at that time.

He commenced business probationally, in March 1960, and announced his plans to devote himself to the business in three years time. This new type of people's financial business was approved of by many consumers. 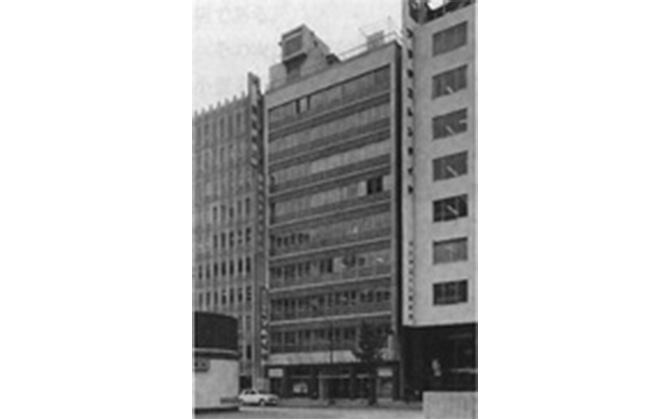 The Tokyo branch opened in a
leading business area in Tokyo

In August 1967, the Tokyo branch, the first branch in Tokyo, was opened on the ground floor of a building located in the main street, in Yaesu. It was standard practice at that time to operate people's finance outlets in back streets. However, the Tokyo branch, with its entirely bright image, promoted a unique practice. Thus, the Tokyo branch attracted public attention, even featuring in the media, and became a model outlet which people in the business visited to observe. 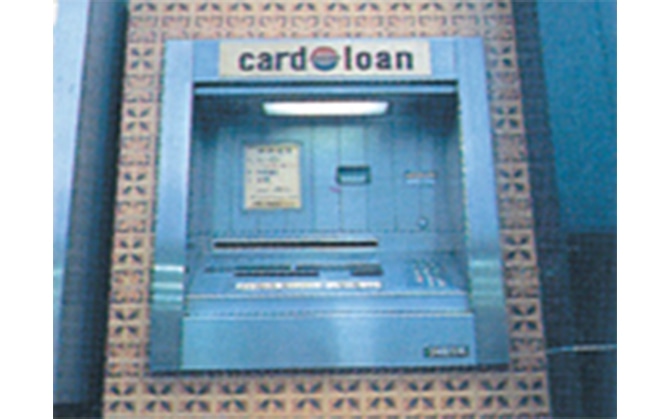 In the 60's, a card loan using Japan's first "Cash Dispenser" was developed with the view to a rapid distribution of vending machines. Its 24-hour/365-day service was started in May 1970. 20,000 yen inside an envelope would come out by inserting a laminated card with punch holes in it. This dispenser had the same features as vending machines.

The Establishment of ACOM CO., LTD. 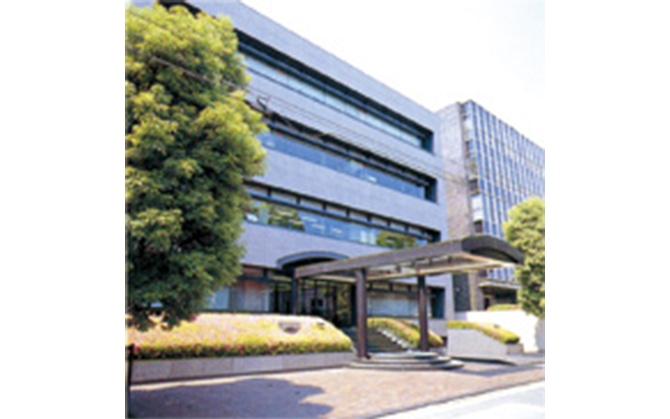 On October 23, 1978, ACOM CO., LTD. was established, with a 100% investment from its predecessor, Maruito Co., Ltd. Behind this is a strong will in aiming to become a public company in the consumer credit business domain. In order to clearly express this, it was necessary to move away from the company name associated with the Chinese character "Ito", which traced back to the drapery business.

Therefore, the company name ACOM, from the capital letters of "Affection", "Confidence", and "Moderation" was given.

Affection represents "a cordial and warm relationship, putting ourselves in customers' shoes". Confidence represents the behavioral guideline of "building a better relationship of confidence with customers", which has been handed down with the spirit of "Trusting customers" since the foundation.

Moderation represents "a moderate corporate attitude which exists soundly in customers' lives", with the hope of being highly regarded and recognized, as a community-based company. 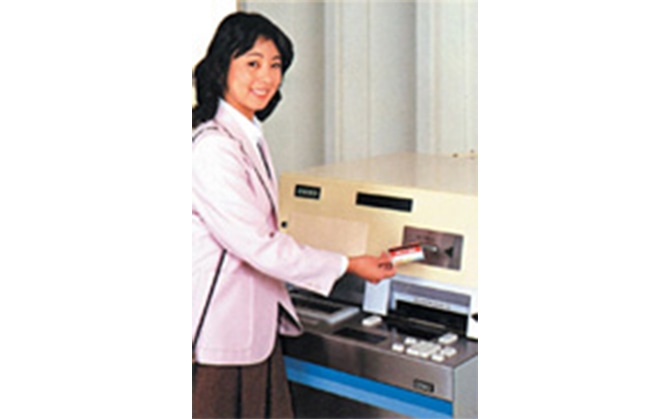 The pursuit of customer convenience offered by advanced technology, which started with the Cash Dispenser, led to services adopting ATMs.

In December 1979, an ATM which operated for 24 hours a day, for 365 days in a year, was first introduced in the consumer finance industry. Furthermore, we promoted advanced services, including a revolving system added to card loans.

"MUJINKUN", automatic contract machine, developed ahead of the industry 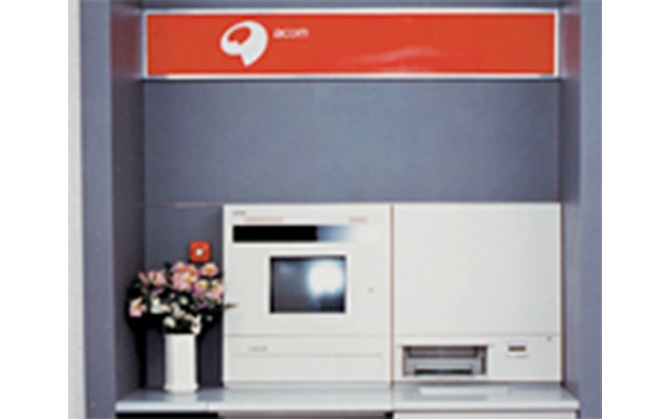 "The first-time customer's mind is mostly on a face-to-face contract process. If this same process is available on a machine, they could use it without feeling self-conscious."

This idea generated by an employee motivated the company, and led to the debut of "MUJINKUN" in July 1993. This innovative perceptional change exposed a number of underlying needs in the market, and became a driving force to lead ACOM and the entire industry forward.

From Over-the-counter Stock Market Listing, to Listing on the first section of the Tokyo Stock Market

On October 1, 1993, ACOM went public, and listed on the over-the-counter stock market.

Since there was no precedent for public stock offering in the consumer loan business, we required much effort in preparation for the company to go public. However, we were able to achieve this, thanks to the round-the-clock effort made by our employees. 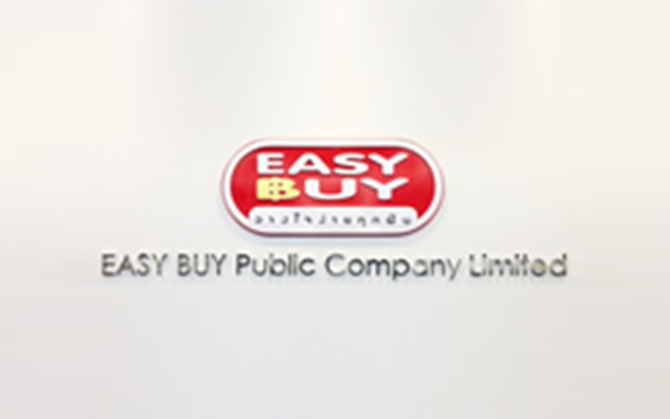 EASY BUY Public Company Limited, a consolidated subsidiary in the Kingdom of Thailand , established in 1996, was mainly practicing installment sales finance business. However, it entered into the loan business in 2001, and has been maintaining more than 20 % of its market share, which is No.1 among nonbanks. The loan card brand, "Umay+ Card", which was launched as a part of differentiation strategy, has gained high recognition, and guarantees the advantage of its brand.

In addition, we established a joint venture for unsecured loan business, "ACOM CONSUMER FINANCE CORPORATION" in Republic of the Philippines in July 2017. This company commenced operation in July 2018. 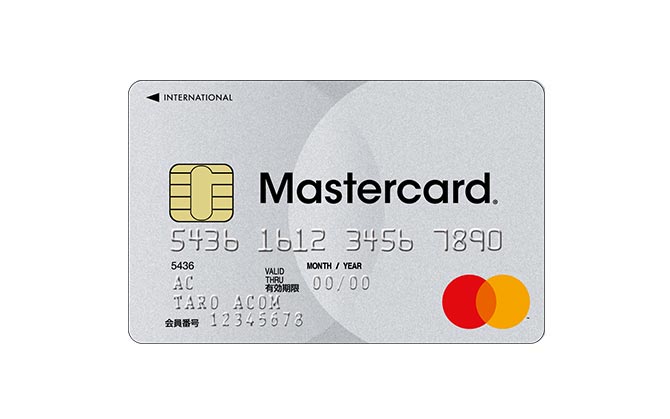 ACOM became a principal member of Mastercard International in July 1998, and entered into the credit card business first in consumer finance industry. This credit card has been developed to be the most user-friendly, with comprehensive merits. 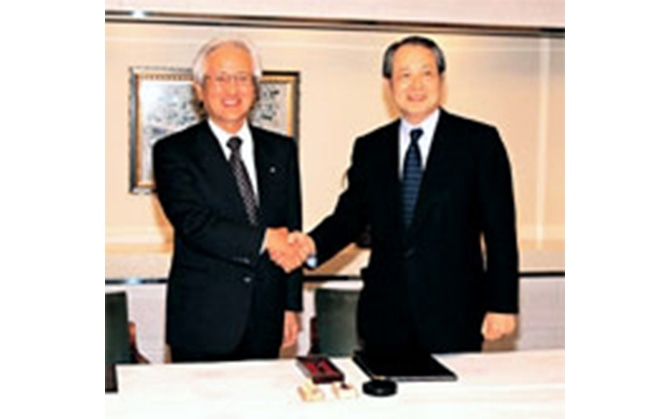 At the signing ceremony

ACOM, which has been expanding its business with its philosophy of consistently adapting and coping with the changes in environment, market, and customers, reached a large-scale alliance - namely, a strategic business and capital alliance, with Mitsubishi Tokyo Financial Group (present, Mitsubishi UFJ Financial Group) in March 2004.

This alliance scheme with Mitsubishi UFJ Financial Group, has been steadily progressing, and further ensures ACOM Group's growth in the consumer credit market.

In addition, in September 2008, ACOM officially announced a further strengthening of business and capital alliance; and became a consolidated subsidiary of the Mitsubishi UFJ Financial Group in December 2008.